Hadoop is an open source project that aims at providing a framework for large volume scalable & distributed data storage and computing. On top of this "base" framework, a number of additional open source products have been developed and are becoming very popular amongst Data Scientists. This set of tools is often called the "Hadoop Stack".

Since its initial release in 2006, Hadoop has been growing and evolving. And more importantly, the Hadoop Stack building blocks have drastically changed over time: some software products that were important and popular a few years ago have faded, while others entered the picture and some became so important that they currently are the real Hadoop! "front end"!

The origins of Hadoop go back to the years 2003–2006, when Doug Cutting and Mike Cafarella re-implemented the Google distributed file system GFS and Google's MapReduce idea in Java within a web crawler project called Nutch. Since then, Hadoop continued to grow in functionality and in number of users and contributors, under the umbrella of the Apache Software Foundation: a not-for-profit organisation that currently hosts more than 350 open source software projects.

The main goal of Hadoop can be summarized as follows: it provides a stable layer, comparable to an operating system, for storing data (like a file system) and performing data manipulations (like a task scheduler), on top of a TCP/IP network of independent and potentially unreliable computers (called nodes) of a so-called computer cluster.

This distributed storage & computing layout allows for in principle unlimited upscaling, both in storage capacity and in parallel computing capacity. Also, hardware failures (e.g. crashed disks) are solved by just replacing that node.

As you may find out by searching for the term "Hadoop stack", and more specifically for images for this search term and comparing older and newer images, the stack of software products (and more specifically: Apache products) that build on Hadoop is constantly changing. And each software vendor will of course have its version of the stack image, thereby highlighting the important place of its own software product in this context! 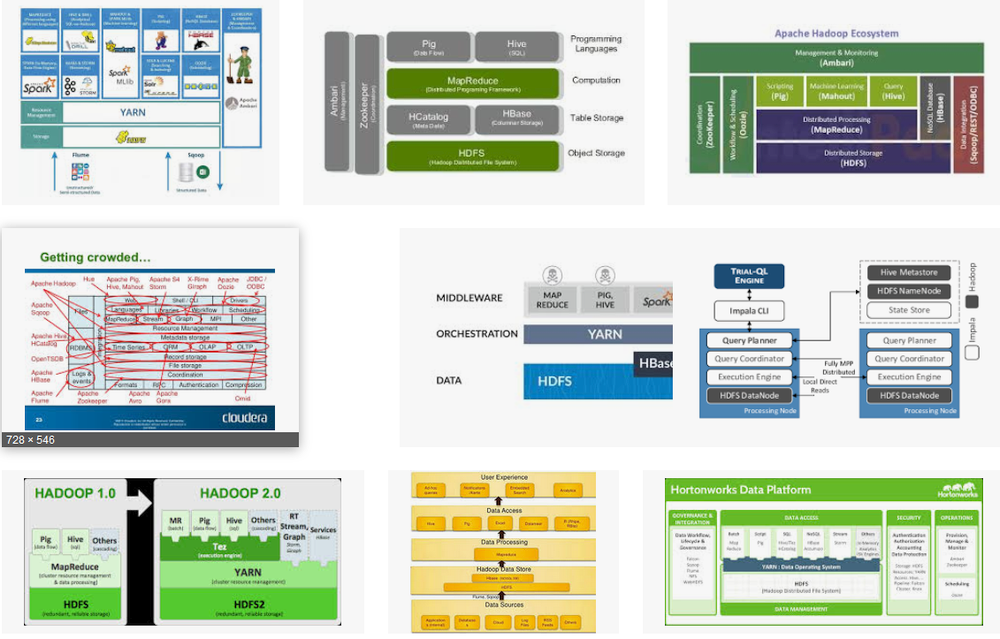 Let's try to be vendor neutral here, and concentrate on Apache products which are popular and generally considered useful. Below is the new Hadoop Stack, with what we at ABIS currently (2019) consider to be the most interesting Apache products that build on the mentioned three Hadoop core building blocks, either directly or indirectly. 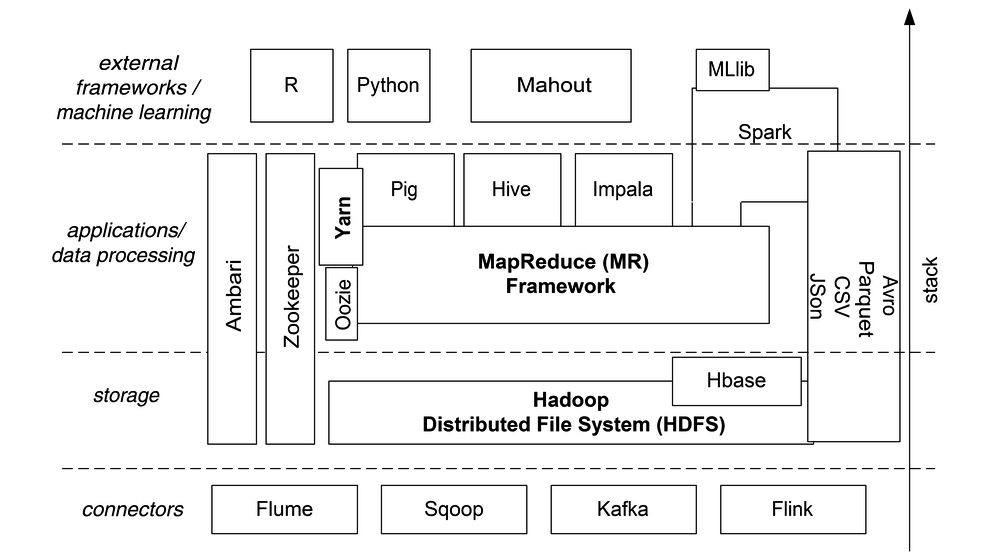 The building blocks in a nutshell

Apart from the three "base" Hadoop components (HDFS, MapReduce and Yarn), the building blocks can be roughly subdivided into four categories: connectors (to external data), storage (and file formats), data processing (which are mainly front-ends to MapReduce), and high-level applications (e.g. machine learning) and interfaces to programming languages.

Actually, this list is far from complete, and new functionality and even new software is added while I'm writing this text... But as a start, you should certainly have a closer look at the above mentioned Apache products. It's worth the effort!

The Hadoop ecosystem is still a quickly evolving set of building blocks, altough is now seems to gradually stabilize. Want to know more? Please consult the list of ABIS courses on the subject!